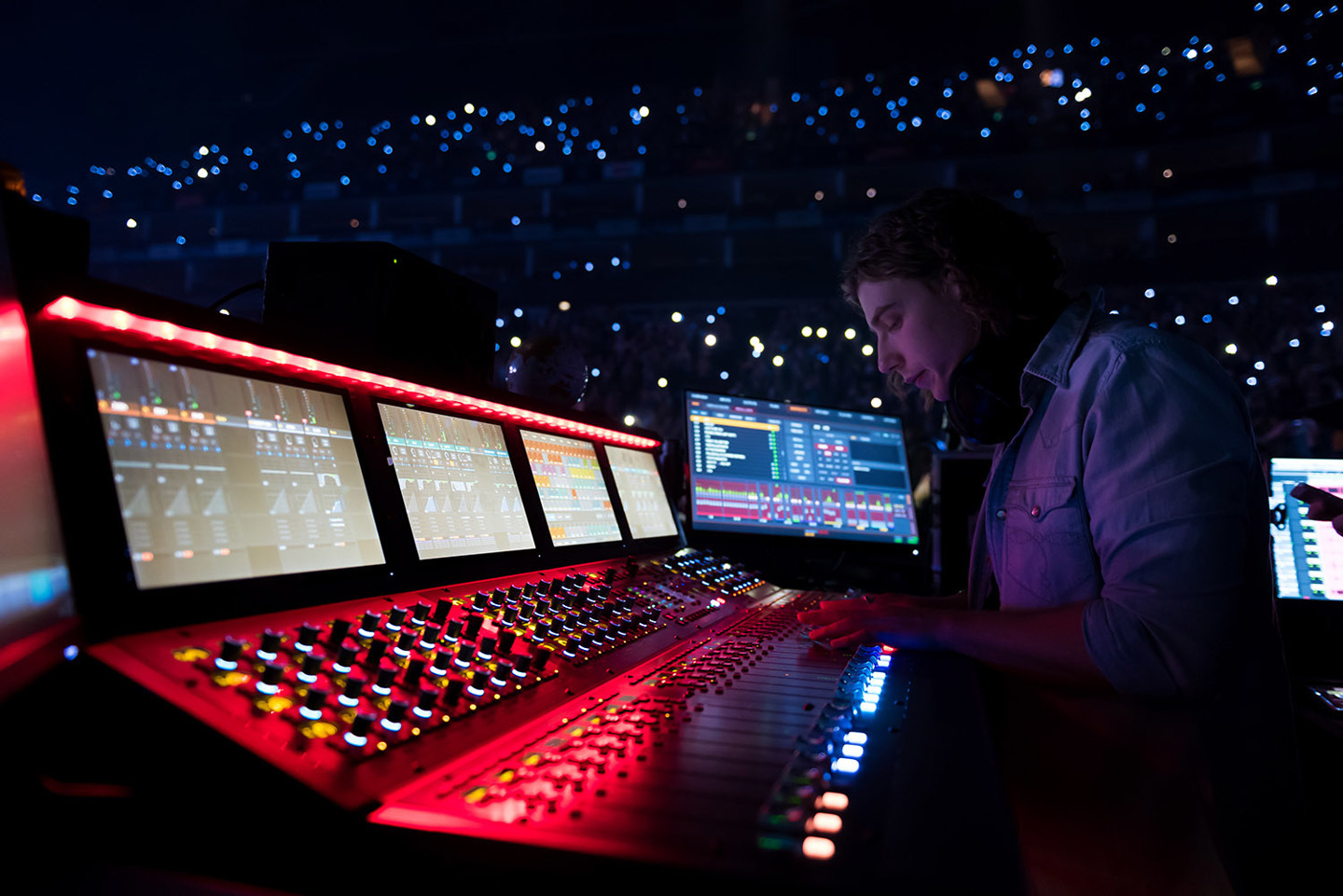 GETTING THE PERFECT SOUND FOR SHAWN MENDES

Tom Wood’s resume is impressive. The Toronto-based live sound mix engineer has toured with renowned artists such as Florence and the Machine, Billy Corgan, Julia Michaels and Liam Payne, to name but a few. Yet Tom Wood is still in his twenties, almost as young as his main client, the musical wunderkind-turned-superstar Shawn Mendes.

Born and raised in the Midlands of the U.K., Tom Wood moved to Canada in his late teens, already determined to pursue a career as a touring FOH engineer. Clearly, Tom Wood knows what he wants! We talked to him about his passion for live sound and how Neumann monitoring has improved his workflow.

I’ve been with Shawn for almost 5 years. We will always have a unique relationship, as we were both so young when we started working with each other. In fact, Shawn was only 17! There has always been a complete freedom to bounce ideas off each other in order to better the show. I’m pleased to say, the same is true to this day. We chat often about the previous night’s show and ways we can all be improving. It’s a great environment to work in.

How did you become an FOH engineer, and what’s your advice to aspiring live sound mixers?

First of all, you have to be very sure it’s the right career for you. I’ve seen many people who had potential realize after a year or two of an audio course that the lifestyle isn’t for them. It can be very hard to be away from home for long periods of time and even harder to get to a stage where you are renowned enough to even be considered for a tour.

In my case, a local studio happened to offer a ten-week introductory course on sound and recording. I enrolled and studied under engineer and instructor Den Hands, who I credit as being critical to my career trajectory. After finishing the course, I made sure to stay in touch with the other students I had studied with. The majority were a lot older than me and already working on their own musical projects. I decided to take my education to the next level, and at 16 enrolled on a two-year college course in Music Technology. I used my spare time to work – often for free – with other engineers I had met. I quite literally made the final years of my teens, eat, sleep, audio. It drove my parents nuts, and quite rightly so! I would be at college from 9 am to 5 pm and then go straight to work at a recoding studio until the early hours of the morning. If it was a weekend, I would take any live gig that needed an engineer. Sunday would be used to catch up on homework and sleep … unless there was something more interesting going on in the studio!

By 18 I decided North America was the best place for an aspiring touring FOH engineer. I headed across the Atlantic to study Show Production Management at Metalworks Institute in Mississauga, Ontario. I was so enamored by my new surroundings that within a few months I made the decision to stay.

Through a little bit of unpaid work and networking, the touring part of my career really took off, and I began working with artists such as K-OS and Dragonette, travelling across North America. I’m pleased to say the momentum continued, and after multiple North American tours with mid-level artists, I was recommended for the Shawn Mendes gig.

Which tasks are you responsible for as an FOH? What does your job entail?

Mixing! I know that is an obvious answer but that’s the big one. A typical day will see me start setting up FOH at 11 am. I’ll use the local crew to help me unpack my console and lift my outboard and then start patching things. On a good day this process will be finished by around 1 pm, at which point I’ll start working with our Systems Engineer Jeff Wuerth to time align and tune the PA system for the particular space we’re in. I’ll use a recording of the last show and start a ‘virtual soundcheck’ in order to optimize the system for the room and to make any changes in the mix that I feel are necessary. By 3 pm this will be done, and our backline team, monitor engineer and myself will line check. 3:30 pm marks the start of soundcheck with the band. Shawn will usually run a song or two but being so many shows into the tour, things are pretty informal, and usually the guys will jam something fun instead of playing the same song for 100th time! Once sound check is complete, we have a little downtime before dinner and then the show.

How do you make Shawn sound the way he sounds? Any tricks?

We’re really not reinventing the wheel here. I’m lucky that Shawn has a fantastic and dedicated band that care about sound. The same is absolutely true for Shawn himself who is a total audiophile. All my processing is done onboard my Avid S6L and Waves server, the only exception to this is a pair of Avalon 737’s that are for Shawn’s vocal and the new SSL fusion, which adds a touch of magic to my music only bus.

With such good source sounds, I’m able to turn a lot of things up, tidy them up here and there and let the music happen. It’s very refreshing. Shawn loves lots of vocal delays which I will do on the fly every night. He has an unbelievably consistent and powerful voice, which is a dream to mix. You can really drive it into a compressor if the mood takes you and it will still keep going for days. If Meatloaf, Pavarotti and Michael Bolton came together and genetically engineered a singer, Shawn is probably still better.

You told us you use Neumann studio monitors while you’re on tour with Shawn. What exactly do you do with them?

The KH 310 are my anchor. They have had a crucial role at various parts of the pre-production and touring process. During rehearsals, in the absence of a PA, I used the 310s to build my initial mix. As the tour began, I used them as a reference monitor. Being in different rooms every day, it’s crucial to have a medium you know is consistent in order to ensure the mix is in a great spot. It’s easy to find yourself changing elements of the mix in a bad room when really you should be working with elements of the PA system. The KH 310 allow me to really take control and make good decisions on this front. In addition to all of this, when Shawn is working on unreleased material that will eventually be worked into the set, it’s not possible for me to use the PA system to work on a mix. In this scenario, I can use the KH 310 as my personal near fields and get ahead of the game without losing my job!

How did you come across the Neumann brand? What convinced you?

I think it would be very hard for anyone serious about audio to not come across Neumann early on in their career! In this case, I was introduced to the Neumann U 87 at 16 years old as the industry standard studio vocal mic. Obviously, there are many other applications in which I’ve come to know and love this mic, acoustic guitar recording in conjunction with a KM 184 immediately springs to mind. As part of my initial education in audio, we talked at great length about what makes a microphone preferable for different applications. Frequency response is a crucial topic when it comes to picking a microphone and I understood early on why the beautifully even response of the U 87 makes it such a go-to. Just the tiniest of peaks from 5k to 10k. Perfect.

The KM 184 has been my favorite hi-hat/percussion mic for a very long time. It’s sounds super sweet and translates the elements of the cymbals that are really important without coming across as harsh. It can really cope with high SPL with ease. You will find the 184 on our hi-hat, percussion and ride cymbal. In fact, I can’t think of anything better at bringing out the bell on a ride cymbal!

Why did you choose the KH 310 studio monitors?

The truth is, they chose me! I hadn’t picked a particular monitor that I was loyal to until the start of this year. I had experience with many other products but love to try new things. When I asked what our audio supplier, Clair, had available they suggested the KH 310. I have NEVER heard another monitor that is so honest but still so pleasing to listen too. I get concerned building mixes on some of the competition because they sound a little too good to be true. Conversely, when our Musical Director comes over to take a listen, I still want some magic from those cones.

It’s actually quite hard to miss the long sought-after stereo ‘sweet spot’ when listening in the near field. Working in the dynamic and ever-changing environment that is live sound, this is important. I’m currently not using the 310’s with a sub, which I’m pleased to say hasn’t been a huge issue. The low end is very honest and still gives me enough information to recognize what will translate well in the PA system. Even their physical shape make them an incredibly practical monitor for the live sound market.

What do you see as the main advantages using these monitors in your daily work?

As mentioned above, I like to think of them as an anchor. I never have to question why something doesn’t sound the way I want it to. For example, if I hear an unpleasant frequency in a guitar when I listen through the PA, but the mix sounds great in the monitors, I know I should be addressing the PA within the room and not my mix.

It’s also refreshing to spare the rest of our non-audio crew the high SPL levels associated with turning on a line array at various points during the day. If I want to check something from last nights show, but there are riggers working in the roof, I can still work away without causing a safety concern.

Have you had a chance to check out Neumann’s new NDH 20 headphones?

In a similar way to the KH 310, the NDH 20 are very honest in the low to mid range. What is particularly impressive is the feeling of sonic space. The image being delivered is beautiful. To me, it feels like the headphones are breathing.Having used multiple other extremely high-end reference headphones, I can confidently say the NDH 20’s are the most comfortable and pleasing over a long period of time. I’m going to have a problem restricting them to work use only!

To anyone lucky enough to be trying a pair out soon, I found “Magic” by Mick Smiley to be the perfect track to accentuate the concept of space I’ve mentioned. “DLZ” by TV On The Radio does a wonderful job of showcasing how an inherently busy mix is conveyed evenly across the spectrum … and John Cage’s, “4’33’’ to really bring home just how comfortable the NDH 20 are over long periods!