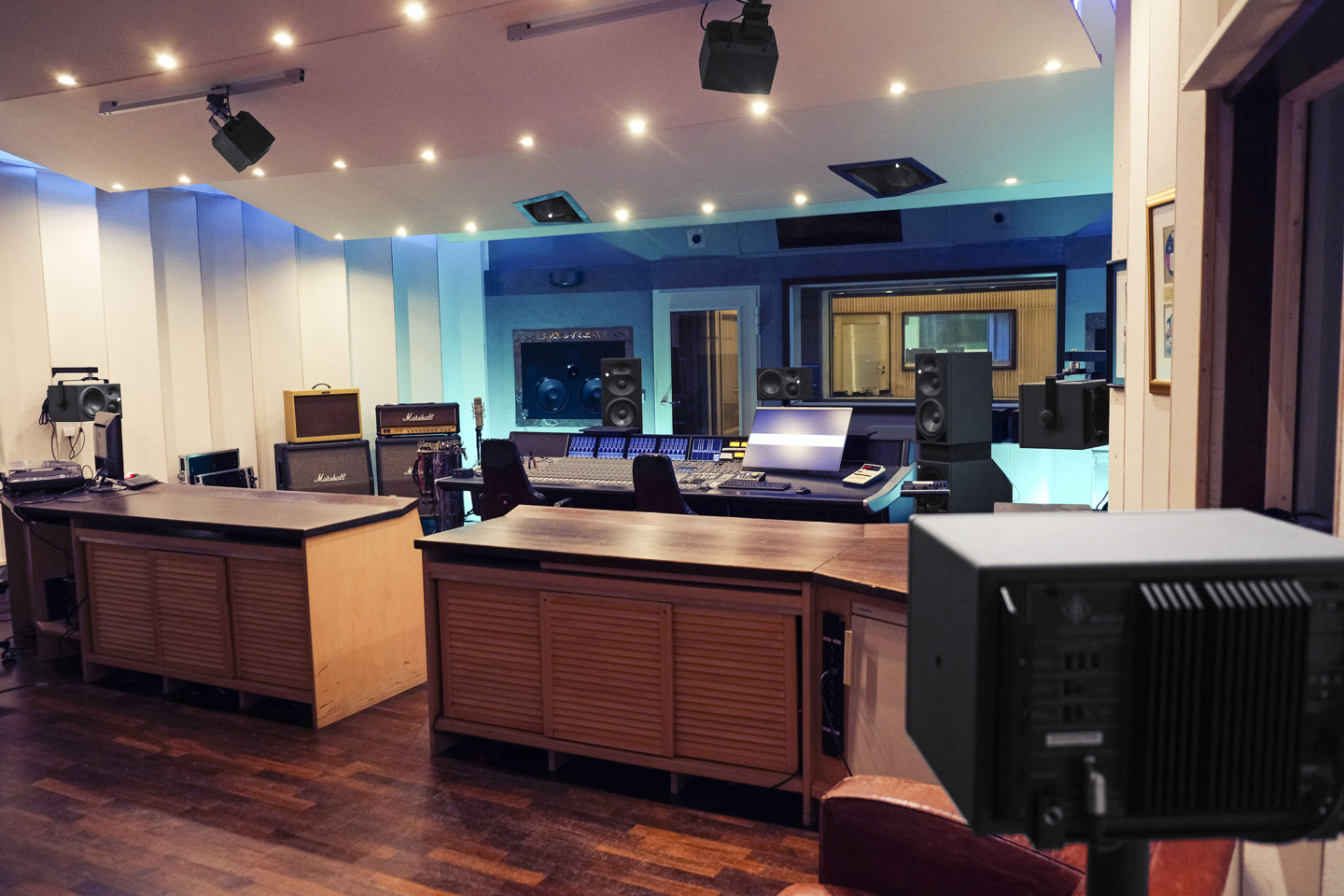 Hannover, February 2022 – At Peppermint Park Studios in Hannover, the impressive 90 square meter control room is now equipped with a state-of-the-art Dolby Atmos system, and Neumann studio monitors are an important component for the immersive 3D audio experience. For studio owner Wolfgang Sick, Neumann was an obvious choice: “Neumann has been a reliable partner for years. For a long time now, we trust the detailed resolution of the KH 420 monitors and the powerful KH 870 subwoofer for sensitive mixing tasks. When we sent Neumann our request for the new Dolby Atmos system, on short notice, they responded instantly and helped us out, which confirmed that we had made the right choice.”

By Fall 2021, The Scorpions, one of the most successful German rock bands around the world, had been working at Peppermint Park studio for almost a year. Over fifty guitars and dozens of amps were set up in the 120 square meters of Studio 1. Originally, the sessions were planned for rehearsal and pre-production of the upcoming album. But the Scorpions felt so comfortable at Peppermint Park that they changed their plans and decided to record the entire album right there.

After the recordings, sound engineer and producer Hans-Martin Buff suggested mixing the album in Dolby Atmos Music. To meet the deadlines, Peppermint Park Studios had exactly three weeks to get their control room ready for the Dolby Atmos Music certification. For Wolfgang Sick, that was an important decision towards the future: “Dolby Atmos is on everyone's lips right now. I'm sure it's a good investment because Apple, Amazon, and many others have jumped on the train of immersive audio. Besides, major record labels are now contacting us with requests regarding 3D audio.”

For the 7.1.4 system, seven models of the KH 310 3-way nearfield monitor and one KH 870 subwoofer are used in the Peppermint Park control room. Additionally, four compact Neumann KH 120 loudspeakers are now installed on the ceiling. According to Sick, even David Ziegler of Dolby Atmos was thrilled by the sound of the control room. Sick explains: “You just have to experience it yourself. Our control room is very spacious, and we took full advantage of it when we set up the Neumann monitors. Therefore, we are fortunate to offer a very wide sweet spot. During the mixing sessions, it’s not only the engineer sitting at the controls who can enjoy the experience but the entire band."

Music, Experience, Explosion
​"In the future, we will offer three different levels of immersive audio mixes at Peppermint Park: a music mix that makes everything sound bigger and wider, an experience mix where we show the possibilities of the immersive audio system, and an explosive mix that offers the maximum of three-dimensional effects. However, well-crafted and well-recorded music will always remain the most important ingredient,” Sick continues.

As Dolby has already partnered with Universal Music and Warner Music, the support of the music industry is guaranteed. In addition to newly released music, many albums by famous artists such as The Beatles, Coldplay, Lady Gaga, etc. have now been remixed in the new Dolby Atmos format.

Totally suitable for large audiences
​“I'm sure that Dolby Atmos Music is meant to stay. After all, young people are growing up with 3D audio and the format doesn't require any additional equipment. Nowadays, everyone has headphones and that's all it takes to enjoy the immersive audio experience. In my point of view, Dolby Atmos is totally suitable for large audiences,” says Sick.

When it comes to recording, the engineers at Peppermint Park are also open to experimentation. Especially as they can rely on legendary microphones such as the Neumann M 50, the U 47, or the KM 54: “We love to take our Neumann treasures out of the closet. Now we can use them to record directly for Dolby Atmos. With eight individual microphones, Hans-Martin Buff re-amped some tracks of The Scorpions in our giant recording room to capture the impressive three-dimensional ambiance.”

For Wolfgang Sick, immersive audio in Dolby Atmos format is not just a trend, but a real game-changer. “Once you have listened to music in 3D, you don't want to go back to the stereo format. 3D audio will become the new standard, and stereo will probably just sound small and cramped for future generations. With our new Neumann-powered Dolby Atmos system, we're looking forward to shaping the future,” Sick concludes.

About Neumann
​Georg Neumann GmbH, known as “Neumann.Berlin”, is one of the world’s leading manufacturers of studio-grade audio equipment and the creator of recording microphone legends including the U 47, M 49, U 67 and U 87. Founded in 1928, the company has been recognized with numerous international awards for its technological innovations. Since 2010, Neumann.Berlin has expanded its expertise in electro-acoustic transducer design to also include the studio monitor market, mainly targeting TV and radio broadcasting, recording, and audio production. The first Neumann studio headphone was introduced at the beginning of 2019. Georg Neumann GmbH has been part of the Sennheiser Group since 1991, and is represented worldwide by the Sennheiser network of subsidiaries and long-standing trading partners. www.neumann.com