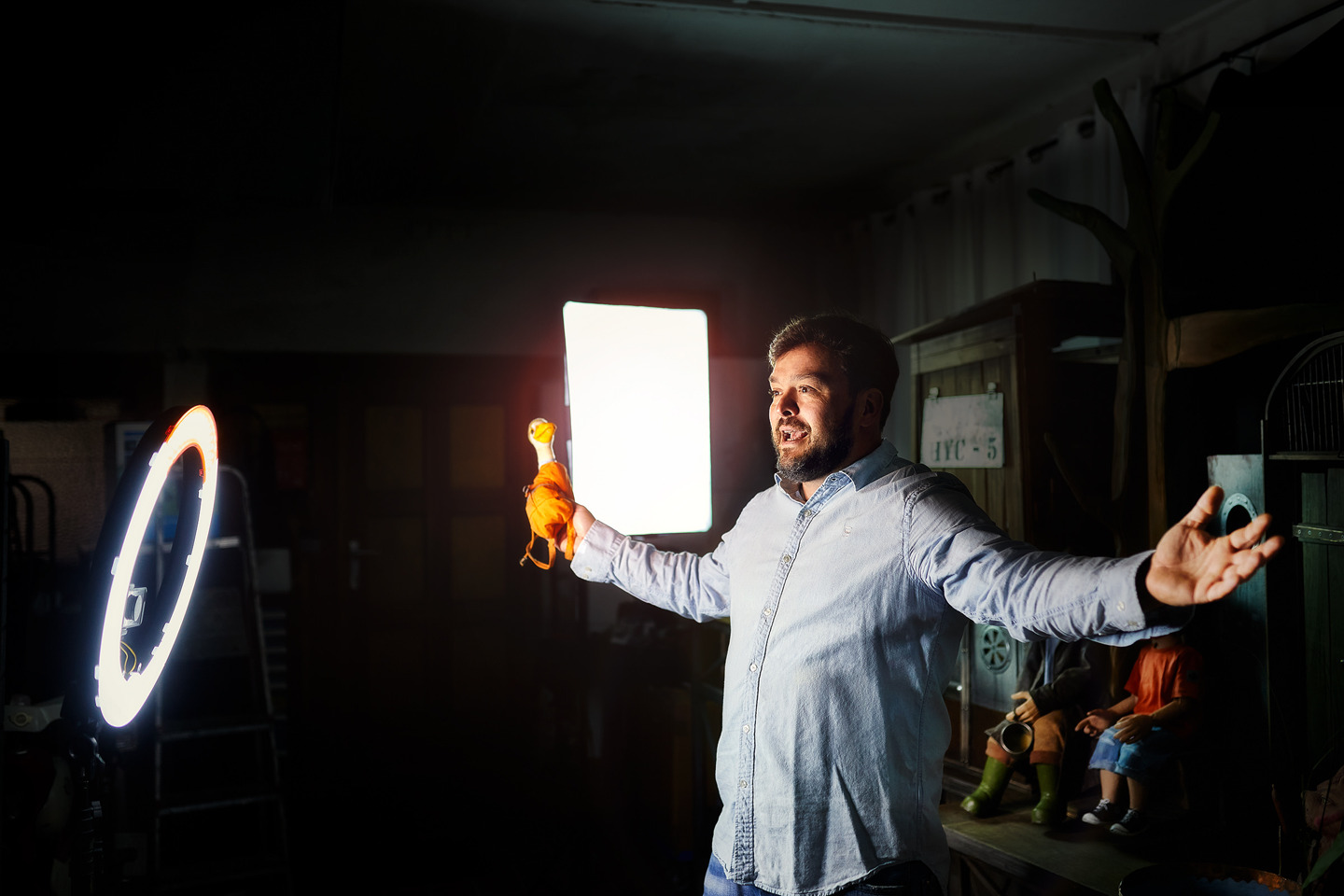 "Come along, little one, I'll bite you on the nose!"

If Christian Bahrmann doesn't happen to be working on the next season of the successful children's TV show "KiKANiNCHEN", he will be standing in his home studio and croaking. And hooting. And growling. We visit the studio of a modern-day puppeteer, and find out about music production, the live stage and media productions all done in a converted barn.

The man is standing in a small room, hissing and grunting, growling and giggling, pleading and trembling. His voice is first wolf, then rat, then a sweet little mouse and shortly afterwards an inimitably proud princess. Correction: an irritating princess. Everything in terms of dynamic range, plosives, tonguing and delicate additional sounds or cooing noises that can be packed into one voice is whispered or roared directly into the headgrille. Then it is over. We are right out in the country, the number of houses is decreasing and so is my cellphone signal. "I think we've got it", says a jovial Christian Bahrmann, whereupon he goes into the adjoining room, throws a few logs into the roaring stove and sits down at his desk. We are in the middle of his studio, rehearsal room, workshop, communication center, office and production center.

This voice, by the way, would (probably) be recognized instantly by 50% of German-speaking children. Bahrmann is "Christian", a presenter on "KiKANiNCHEN", the successful TV show for pre-schoolers (internationally: "Dibidoo") which has won several awards. The team spends up to 120 production days a year on the show, of which there have now been 12 seasons. The fan mail by no means just comes from Germany any longer, it may come from Venezuela, Sydney, Thailand or the UK. But that's not all. Bahrmann is a fully qualified puppeteer, actor and singer. He tours with his own program, records CD albums for kids, and produces videos for public agencies that explain Covid rules in a child-friendly way. He has just done a voiceover for a film version for blind people. Many of these productions and shows start off here, in the vastness of Mecklenburg-West Pomerania. Bahrmann records the first sketches and also many parts of the production in his own studio, forwards them for post-production or works remotely with the director, with studios, and with colleagues. "The BCM 705 has had to listen to quite a lot", laughs the 46-year-old. The possibility of producing from home used to represent "some quality of life, some artistic freedom – since last year it has been a lifeline for our industry, for our art. We can continue to work to a high standard, in different formats and on different projects, while our theaters are unable to open", says Bahrmann. And no, really, he is not the best singer , "others are better at this. At heart, I am a storyteller."

Two of the most important tools Bahrmann relies upon when telling stories are the BCM 104 and BCM 705. It was Christian Riegel, sound engineer from the famous Tonbüro Berlin, who, with a smile, pointed out the tiny error he was making. The two know each other from joint productions, with Riegel being responsible – among other things – for mixes for TV and cinema productions. He said: "If you want an awesome sound like what you are used to from us, then you need superior monitors, then you need to upgrade. And monitoring powerful microphones with poor-quality headphones ... that makes no sense at all." At the same time, they ought not to be gigantic affairs that obstruct your comfortable workstation. The decision was clear: the KH 80 DSP fit into the space and suit the requirements and projects perfectly. "Thanks to them I have gained huge production potential, including during the months of the pandemic", says Bahrmann.

They have recently been joined by a set of NDH 20 studio headphones: "The sound is sensational, they feel great and you can wear them for hours on end. Most importantly, I effectively now have my reference sound 'to go'. This doesn't just make sense in acoustic terms, but is also hygienic: there's no hassle over disinfection for anyone. I drive over to Production, we record something that we sing – and I notice immediately if something sounds different. And no one has to clean any ear pads afterwards. I also take the head- phones with me to dubbing studios, for example when recording radio plays. This means I can directly access the reference sound for my instrument, my voice."

It is not just his voice where Bahrmann has high standards. Anyone who listens to him in his workshop in the middle of nowhere quickly realizes that he is serious about his most important target group, children. Being needlessly silly, overexcited or childishly naïve is not his style. He doesn't act for children, but together with them, into and out of their world. His former theater in Berlin – the "Prenzlkasper" – thrived on contact, on dialogue with the youngest members of the audience. In his shows they are not guests, they are part of the performance. This generates dialogue, improvisation and an enthusiasm which infects all age groups in the room – whether in front of or behind the scenes, with very old or with brand-new material. Because Mom and Dad, Nana and Pop – they like to come too. They like it a lot.

In fact, Bahrmann almost became a teacher. "You could say that I ricocheted off the degree program", he now recalls with a grin. And then says, a little quieter: "Lots of teachers have to shout on their stage. I whisper – and the children hang on every word. Take a look. I am also a mediator between the child and adult world nowadays, but in my own way."

After three semesters Bahrmann gave up his teaching degree and applied to the prestigious Ernst Busch Academy of Dramatic Arts. He rapped his application in front of the admissions panel – to "Mr. Wendal" by Arrested Development. Looking back, that doesn't surprise anyone.

Bahrmann grew up in the former East Berlin. His father built him a puppet stage underneath his bed. Christian was 4 years old at the time. Aged eight, he helped out at the puppet theater founded by the legendary Harald Preuss. "There, I was somehow the boy on the door, the technician, the roadie, the puppeteer and the trainee all rolled into one", the actor recalls today. It was a kind of basic training in the magic of this theater. "In what was then the GDR, there was already a special dignity to puppetry, it had real status. Virtually every county (Bezirk) had its own stage."

His last few years at school then saw the fall of the Berlin Wall and German reunification – a good opportunity to check out the former class enemy. Bahrmann applied to spend an academic year in the US as an exchange student – and in 1991 ended up in Minnesota. "That was not quite the America from the TV", remembers Bahrmann, laughing. But the year became an eye-opener neverthe- less. "I was in a speech class and we learned how to give a speech in front of an audience. And the more audience I had, the more I enjoyed it." His teacher gave him some advice to take back to Germany: "Christian – you must go on the stage." And that's how things continued in Berlin: he presented school festivals and put himself to the test in drama groups. After his high-school diploma (Abitur) and a few semesters "on the wrong track", Bahrmann then stood in front of the admissions panel at Ernst Busch, rapped his good reasons – and was accepted.

In the third year of his studies, talent and some strokes of good fortune combined: "And suddenly there we were, with big productions and puppetry, as guests at the Lucerne Theater. After this we put on shows in Stuttgart, and later in Munich and Berlin. And suddenly, in the last year of your studies, you have acted on the country's biggest stages."

His final examination also included a solo piece. Bahrmann put on a traditional piece, as was the norm back then at the Preuss theater: The Brave Little Tailor. He staged and produced it himself and acted out all the roles. Because, naturally, puppetry was his core subject. And unsurprisingly, during his studies he was already working as a tutor for puppetry techniques. To this day, classics such as Peter and the Wolf or Red Riding Hood are part of his established repertoire. Is that not a bit... boring nowadays, we wonder? The man who interacts on TV with a computer-animated rabbit raises his eyebrows in astonishment. Then he turns around and takes metal boxes from a large shelf. Each metal box contains hand- made puppets. In Bahrmann's hand, classic tales come to life quick as a flash: the Wolf, Peter, Red Riding Hood and good old Punch (Kasper). And not as worn-out clichés from old stories, but as extremely talkative characters. The figures change like lightning, the big man steps back and becomes a conduit for their personalities. Voice, movement, everything is transformed. "And precisely that is not boring", he says afterwards, "that is real theater". Amateurs do not know how to bring puppets to life and how to give them a voice, or make them breathe. Quite simply, this entire craft."

Bahrmann honed much of this craft after his studies while on his tours and in his mobile puppet theater. Later, he founded the Prenzlkasper as a fixed venue. In 2009, he started work as a presenter for KiKANiNCHEN.

Alongside this, "Christian" puts his heart and soul into the country's largest puppet show festival, which this year is naturally having to take place online. Next door, a huge puppet stage looms out of the shadows. Bahrmann is setting up the next performance, this time as a video production of course. The good old BCM 705, which has already heard so many voices, will probably have to rise to the challenge again. The red "On Air" sign above the door lights up. Bahrmann's three kids know they mustn't disturb Dad right now. From inside we hear giggling and barking sounds. It's starting up again, somewhere in the open spaces of Mecklenburg-West Pomerania. Where, somewhere in the middle of nowhere, culture is being created that allows both children and adults to giggle, chortle and be amazed.